If someone asked me what I remember most about Evalyn, my answer would be simple; her hands.

I remember the midwife taking her away immediately after birth at my request. I felt her leaving my body, saw a quick flash of her hair as the midwife swept her into her arms and out of the room and I laid there staring at the ceiling wondering how I would even be able to bring myself to say Goodbye to her.

Four hours passed before we were able to summon the courage to see her. It was one o’ clock in the morning and the midwife wheeled her into our room, fresh from her cold cot. She was lying in a wicker basket, wrapped in white blankets and surrounded by little teddy bears she would never get to cuddle and a little rabbit rattle she would never get to shake. I edged myself over to the side of the bed and pulled her basket closer to me, but I couldn’t dare look at her face. Because what if I fell instantly in love with her? What if I looked at her and my love overpowered me? How would I cope if that love was so strong I couldn’t leave her? Or worse, what if I didn’t fall in love with her? What if I couldn’t? What would happen if I looked down at her little face and felt nothing?

So, I looked at her hands instead.

I studied each little finger knowing that I didn’t have long to memorise every fingerprint. Time would seperate us much sooner than I ever would have wished. I observed each fingernail, how the corners of each one had already started to turn a darker shade of purple and I slowly reached out and stroked the length of one of her long fingers, hesitantly at first. Piano Fingers, my nan would have called them. Hands that were perfectly formed to play the piano one day. But hands that never would. Her hands were so perfect. But they were as cold as a Winter’s morning and nothing I could do would warm them up . . . .

And just like that, there she was. Evalyn. Her eyes were closed, her mouth slightly ajar. The skin of her cheeks wasn’t rosy like a little girl’s should be. Instead it was starting to purple like the corners of her fingernails and she looked slightly bruised because of it. But, my God, she was beautiful. Any reservations I had turned to a love for her that made the next 24 hours of my life the hardest to live through.

I said Goodbye to her the next day. I walked away from my daughter knowing it would be for the very last time and as I held her little hand in mine I whispered to her, Always know how much you are loved. Always know that I will love you forever. You will ALWAYS be more than a memory to me . . . . . . . .

Fifteen months can pass by too quickly, yet all I have to do is close my eyes and I’m back in that room with Evalyn. I could have looked at her memory box at any given opportunity, but I chose not to. I just never felt ready. Some days I felt like I was coping OK with my grief. But what if opening the box brought it all back in force? Or on the days when I wasn’t coping, would opening the box actually bring me any comfort or would it just make me worse? And when I fell pregnant with Iola, I became so scared of opening Evalyn’s box in case I saw something that would make me convince myself that this pregnancy would end in stillbirth too. I never knew when the right time would be but I always told myself that when it was time to lift the lid and peek inside, I would just somehow know. . . . . 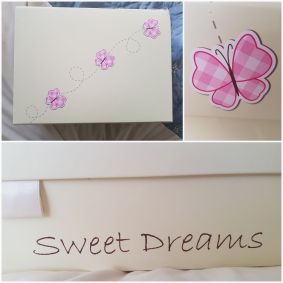 “I think I want to open Evalyn’s memory box,” I said to Nick last week, “I just feel that it’s the right time for me. I can do it myself if you don’t feel ready just yet?”

“I think I’m ready too,” Nick replied, “What made you feel like you’re ready?”

I miss Evalyn. I miss those beautiful hands, her dark brown hair, the way her little body fitted perfectly in my arms. I miss the way I stroked her cheek. I miss the way she wriggled around inside of my tummy before her heart stopped beating. I miss her in a way that on my bad days, makes breathing so much harder. Evalyn’s little sister has been our blessing these past few months, but mothering her has made me pine for my little girl who never came home. And to be given any connection again to her that I can see and feel and touch is probably one of the most beautiful gifts I could receive.

It was a Sunday evening when Nick and I sat on our living room floor, Evalyn’s little memory box placed in front of us.

“Are you ready?” I asked Nick and he nodded in response. 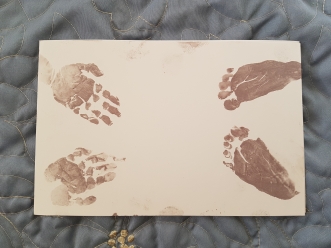 It turns out that time travel is possible. Because as my hand fell upon a single piece of paper with Evalyn’s hand and footprints painted onto it, she was with me once more. There were her hands, those beautiful hands, and I was able to trace over them with my own just like I did at the hospital. And her footprints!! I only realised in that moment that I had never seen her feet with my own eyes. When I had been with Evalyn and held her, she was wearing her babygrow and those beautiful little toes had been covered. But there they were. Tiny little baby feet.

“O, Evalyn,” I cried as Nick held me and I clung to him in response,” I’m so glad we’re doing this.”

“Me too,” Nick said, wiping away his own tears. 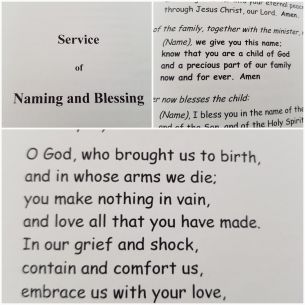 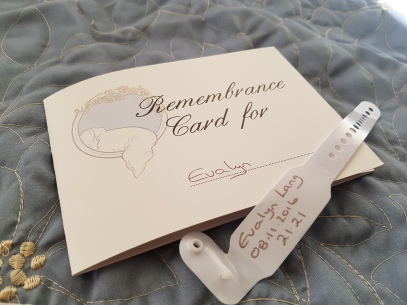 There was a copy of her blessing that we held for her at the hospital the hour we left her. There was another little Ela Bear which we have now given to Iola (and which Ieuan has since tried to claim for himself on more than one occasion)! There were little keepsakes and an ‘acknowledgement of life’ certificate for us to fill in. 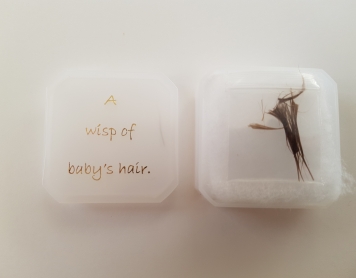 Her hair. Little clippings of her hair, so dark and brown. I held it in my hands, overjoyed that I was holding a physical piece of my daughter again. I sat remembering how I had stroked her hair and how soft it had been under my palm. . . .

“When I lift this next piece of paper, Evalyn’s photographs will be underneath,” I said to Nick.

I’ve never known a piece of paper to feel so heavy. I slowly lifted it out of the box, took a deep breath and looked down.

Not a drawing of Evalyn. Not a blog post I had written or a memory in my head that is always slightly blured. But a real image of Evalyn.

We have six photographs of Evalyn. Six photographs that prove that she once graced the world with her presence, even for the shortest time. I lifted the photos out of her memory box and studied each one carefully.

“I remember,” I said to Nick, “I remember her so clearly now. She is so beautiful.”

For such a long time I have been afraid to look at these photos, yet there I was completely unsure as to why. I think a part of me was afraid that if I dared to look, the triggers would send me spiralling downwards and I honestly don’t know how I would come back from that amount of grief. Instead, they had the opposite effect. They triggered the love I have held for Evalyn since the day she died and made it stronger.

I am so very grateful to  Kirsty and Michael who started making these memory boxes for bereaved parents after the loss of their own son, Louis. These memories aren’t just memories to a loss parent. These memories are everything. They are the only pieces of our babies that we get to keep, to hold, to see and to touch. They make us feel connected to our children in a way that brings us comfort when we need it. And on Sunday night when I sorted through Evalyn’s, I felt more connected to her than I have felt in a very long time.

That means the world. Because I realised one very special thing when I picked up Evalyn’s memory box from my parents house that day and drove home with it on my lap. I realised it when I opened the box and saw her photos and touched her handprints and remembered every single detail of my little girl. . . .

I realised that, in a way, Evalyn is now home with us. 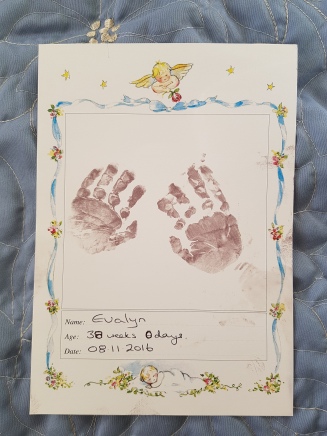 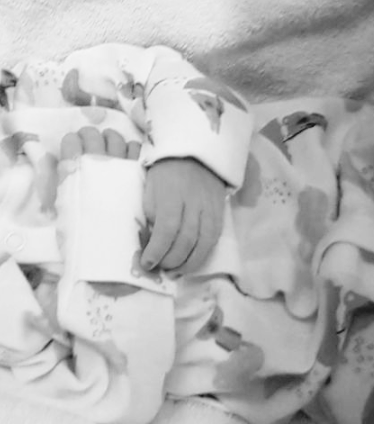 8 thoughts on “Opening The Memory Box”