“They’re beautiful!” I smiled at the delivery driver as she handed me the bouquet of flowers.

I watched her walk back to her car before shutting the front door and turned to find Ieuan standing behind me.

“Why have you got flowers?” he asked as a little frown formed across his brow, “Is something wrong?”

I stopped and looked at him. “Of course there’s nothing wrong. These flowers are because we have Iola. Flowers don’t mean that there’s anything wrong.”

And then it hit me.

I can’t think of a time in Ieuan’s life when flowers haven’t meant someone has died.

It’s a strange thing to realise and something that probably would never have occured to me had Ieuan not voiced his own thoughts. But in his short, five years, he has never known flowers to mean anything but the end of life. It’s not the way he has been brought up by us. It’s purely circumstance.

The fact that I knew perfectly well that he had seen the flowers and played Hide and Seek in a graveyard didn’t bother me in the slightest because my Mum, who looked after him on the days I worked, was a funeral celebrant. She was fortunate in that her services only lasted half an hour and she was able to take Ieuan along with her on those occasions where she had to work. He would play outside with my Mum’s friend, reading headstones and admiring the flowers and and he loved it. He loved spending time with my Mum and her friend and I got free childcare for the day. Win-win!!

The week before Evalyn died, we were walking along the seafront in our home town when we came across a poppy wreath that had been placed on a bench. Ieuan had asked about it and Nick had told him about Remembrance day and how we wear poppies to remember all of the brave soldiers who died fighting for our country. The week after, Ieuan’s school started teaching the children about Rememebrance Day and encouraged the children to wear their own poppies into class.

This was also the week we lost Evalyn.

“Do we have any more vases?” Nick asked as he walked into the kitchen holding another bouquet, “These just arrived.”

I stood in the kitchen and looked around me at the flowers that already oozed from every surface like their own floral jungle.

Evalyn’s death turned our house into a florist. It smelt amazing! And as thankful as we were for the amount of love that was shown to us, every corner of our house was full of flowers that acted as a reminder to us of what we had lost. But it is, of course, customary to send flowers. I would have done the same.

“Evalyn’s got alot of flowers,” Ieuan said when he returned home from school.

Then we were given our beautiful rose bushes that we planted at the front of our house. One for Ieuan. One for Evalyn. We have watched those roses continuously bloom and wilt and Ieuan has continued his rose-growing competition with Evalyn (I’ve got five roses. Evalyn’s only got two. I WIN!!).

When my nan passed away, there were more flowers.

I heard the delivery car drive away and knelt down beside Ieuan.

“Flowers don’t always mean a bad thing,” I told him, “Flowers can mean nice things too. Like birthdays, friendship and love. Flowers can mean so many things, my darling.”

He seemed happy with that and I watched him walk back into the living room and pick up his car game where he’d left off, my heart a little sadder for knowing he had had this opinion for so long and it was only now that I was able to magically correct it.

But sometimes words are not enough.

Today I walked into town and I bought Ieuan, my beautiful boy, a single yellow rose. I waited for him to return home from school and I happily handed him the little flower I had carefully selected (with a little chocolate bar thrown in for good measure).

“Because I love you so much,” I told him, “And one day you’ll buy the love of your life some flowers too . . . just because.”

He giggled and walked away holding his rose.

And I giggled and walked away with my heart a little lighter. 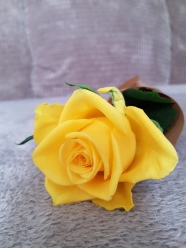 2 thoughts on “Flowers and Feelings”