We were standing near the starting line when a woman we didn’t know came over and pulled us all into a warm embrace.

“I’m so sorry,” she said, pointing to our SANDS tops. She too was wearing a similar one. “It’s just an awful thing to have to go through. I’m running for my Grandson.”

“I’m running for my daughter, Evalyn,” Nick told her, tears forming in his eyes.

It seems like a very long time ago when Nick told me he was going to enter The Great South Run this year to raise money for SANDS. In reality, it hasn’t been that long at all. It’s just that time seems to have slowed down this year. . . .

In the months that have followed I have watched him train so hard – and for someone who hadn’t even ran one mile for many years, ten miles was by no means an easy target. It wasn’t long before our friends signed up too and joined the fundraising team. The past months have been a whirlwind of training, fundraising and raising awareness. 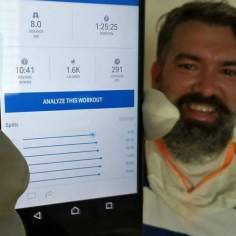 And yesterday, I watched them all compete in the Great South Run.

I was so proud watching Nick running in his cape that he had had made which included the names of babies whose parents we have met and spoken to along our own journey. It was a comforting thought to think that all of those beautiful babies were somehow running alongside him and cheering him on along with all of us. And I was so proud of our friends who love Evalyn as much as we do, who never fail to mention her name on a daily basis and include her in everything we do together. They have all made her so proud. 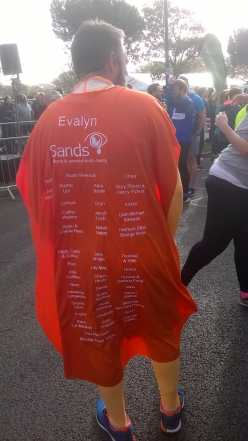 Together, we have raised £5341 for SANDS and there are still donations coming in and money to be added to the pot. Knowing that this money will go towards helping other bereaved parents and families is both a beautiful and comforting thought and it makes us want to do more.

We want to take on more challenges and raise awareness and funding for not only baby loss itself but for all of the amazing charities that help families trying to survive their way through it.

At the end of what had been both a physically and emotionally tiring day, a beautiful rainbow appeared in the sky . . .

She’s always with us. Evalyn will always be with us.